In the Financial Opportunities Forum (FOF) held on 26th May 2015, the following were the sequence of speakers and their contributions:

He discussed about the value system followed by Parag bhai in life itself and applying behavioral finance concepts in the stock market and how to manage emotions in the daily living itself.

Parag bhai was always humble in all spheres of his life and always believed that the way to get rich was to become a successful investor.

This was followed by Raunak Onkar, co-fund manager of the PPFAS Long Term Value Fund. He discussed the nuances of how to identify bubbles in asset classes and also to shape one own’s way of preparing a checklist.

This was followed by a presentation by Hansal Thakker on Munger and Buffet views on a few macro factors at the Berkshire Hathway AGM in Omaha. This was the 50th anniversary meeting where the no of attendees touched 50000.

Munger and Buffet highlighted that USD will remain reserve currency for coming 50 years, Interest rate cycles are difficult to predict and they have been wrong most times. They said that due to irrationality in markets over the 50 year investment career, they have become rich. 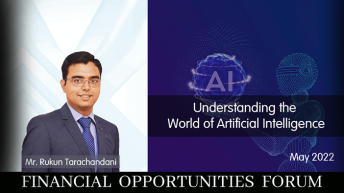 Understanding the World of Artificial Intelligence